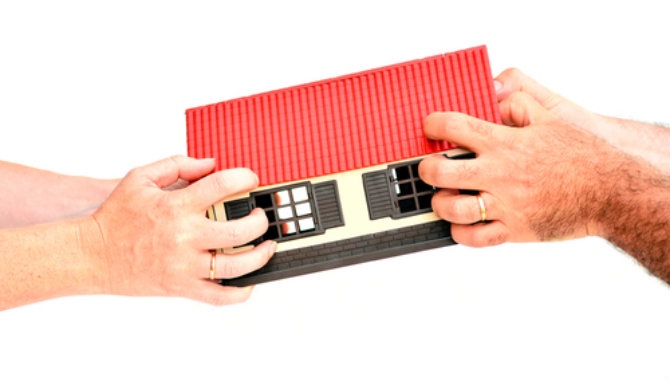 Getting divorced is hard enough as it is. But selling a house during that process only adds to the difficulty and stress of a collapsed marriage.

However, there are ways to make the selling process as seamless as possible. Each case though is dependent on how cordial or embittered a couple is.

If neither spouse wants to stay in the family home, or if neither can afford to buy out the other, you can put the property on the market and try to get the best possible price for it. Keep in mind that before the sales proceeds can be divided, you’ll have to pay off the mortgage, any equity line or second mortgage, and the brokers’ fees. You’ll also have to pay any capital gains tax that might apply. These expenses are one disadvantage of selling, especially if market conditions aren’t good for sellers. Another disadvantage is the need to uproot the kids when they’re already adjusting to a lot of change.

But there are advantages, too. Both spouses get money to start over, and it may help you make a clean break.

Once you’ve decided to sell, you’ll be faced with a lengthy and detailed process that involves a number of projects. Each of these projects takes hard work in the best of times, and the emotional upheaval that comes with divorce doesn’t make them any easier.

While in general, it’s fine to sell a house without an agent, it’s not recommended when you’re in the middle of a divorce—the added stress is really not necessary. Try not to spend a lot of time arguing about who your agent will be. If you were satisfied with the agent who worked with you when you bought the house, see whether that person is available. If you’re starting from scratch and having trouble agreeing, each of you should pick a friend or relative, and have those two people agree on an agent. Or you can each choose an agent and have those two agents select a third to sell the house—if the first two agents are willing to do it with no listing in the offing. (They probably will if they both work for the same realty company and you agree that they can pick someone in their company.)

Settling on an Asking Price

Take the agent’s advice about your asking price—that’s one of the main reasons you’re using an expert instead of selling the house yourself. Turning that decision over to the agent will eliminate one potential conflict. If you think the agent’s opinion is really off-base, you might need a different agent (or a reality check of your own).

Preparing to Show the House

Getting the house ready can be the most difficult part of the sale process. There’s often some work that needs to be done—minor repairs, painting, and the like—before the house is ready to be shown, so you need to agree on where the money for that will come from. If both of you have moved out by the time you put the house on the market, you can leave the place to be staged by the agent. If one of you is still living there, you’ll need to get things cleaned up, get the clutter out of the way, and probably remove some of the furniture. If this work falls mostly on one person, you might need to figure out a way to compensate that person for the extra effort.

You’ll have to work together when it comes time to review offers from potential buyers, especially if you live in a place where the real estate market is volatile. Your agent can advise you, of course, but ultimately you’ll have to make the decision jointly.

Finally, you’ll have to figure out how to divide the proceeds. In general, that shouldn’t be too complex—the escrow company can distribute the money, after paying off all the obligations on the house and making whatever other payments you’ve agreed to. (For example, you might pay off marital debts with the proceeds of the house sale.) And if one spouse has been making postseparation mortgage payments, that spouse has probably been reducing the principle amount and increasing the equity, which may increase the amount to be divided between the spouses after the closing costs and obligations have been paid. The distribution should be adjusted to account for the paying spouse’s contribution.

Imagine that a year passes between your date of separation and the date your house is sold (not an unusual scenario). During that time, your spouse has made all the mortgage payments, in addition to paying child and spousal support. Each month, $1,700 of the $2,200 payment goes to interest, and $500 goes to principal. That means that over the course of the year, your spouse has reduced the principal on your loan, and thus increased your joint equity in the house, by $6,000—using separate property. Your spouse would be justified in arguing that when the profit from the sale of the house is divided, the division shouldn’t be equal. Instead, your spouse should get back the $6,000 in equity that was earned as the result of the payments during the separation.

While going through a divorce can be emotionally draining, Both parties have to be involved in the selling process. If one party does not want to be involved for whatever reason, they must sign off on not being involved in the transaction. There are cases where one party is the single family earner and that person wants to be the sole decision maker